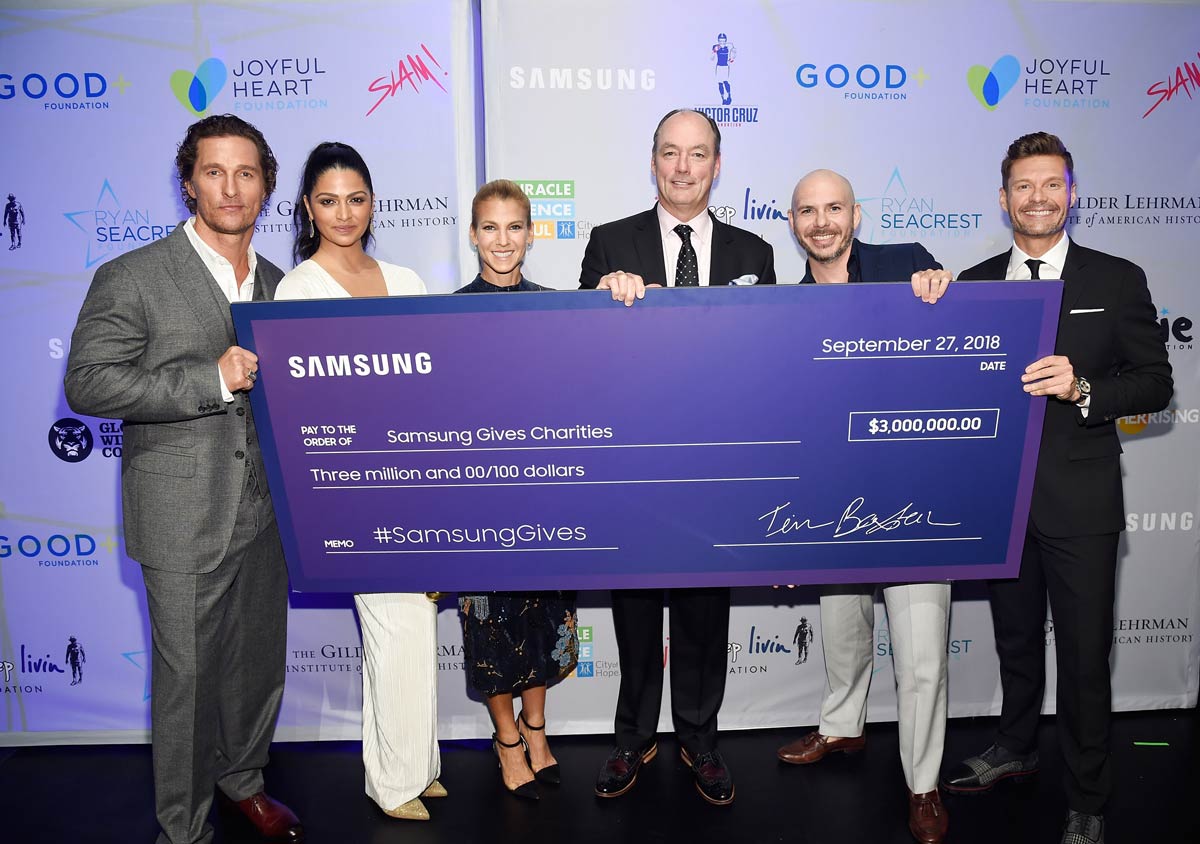 We’re used to being surrounded by stars at The Hammerstein Ballroom. It started back in 1906 with its eponymous and famous founder, Oscar. It was mostly opera in those days but the stars of that form often aligned themselves under our 75-foot hand-painted ceiling, and were feted by well-heeled audiences from our elegant balcony seating.

This collection of glitterati was joined by a talented bunch including: Hollywood A-listers, big-time professional athletes, along with a smattering of business professionals all gathered in The Hammerstein Ballroom to raise money for communities in need. The grand total for the evening was $3 million, an amount that would qualify as grand for any CPA worth his or her green visor.

It certainly must have pleased Tim Baxter, President and CEO of Samsung Electronics North America who said in his opening remarks: “When Samsung talks about wanting to inspire the world and create the future, it’s a vision that reaches beyond the boardroom”. With $3 million in your pocket, you can do a lot of reaching.

And that’s precisely what Samsung has done as it celebrates its 40th year in the U.S. For example, just since 2001, they’ve contributed over $75 million to charities, which has helped more than 2,600 schools, hospitals, and foundations throughout the nation.

As Baxter noted to the throngs in attendance: “One of the best parts of my job is the platform I have to help others. It’s really a privilege to be able to deploy Samsung’s resources in order to change lives.”

Those resources can be seen in many of the Samsung-supported causes the stars came out to represent. There was former New York Giants wide receiver Victor Cruz — famous for his salsa dancing end zone celebrations — saying thanks to Samsung for matching his gift to give $120,000 to a group working toward grid-independent community solar in areas destroyed by last year’s Hurricane Maria.

As the evening progressed, Matthew McConaughey took the stage to represent the just keep livin foundation that he and his wife Camlia Alves head up. It’s about after-school fitness and wellness program that give kids the tools to live a healthier life.

Mariska Hargitay received the Samsung Champion of Hope for the work she does on her Joyful Heart Foundation, which helps survivors of sexual assault, domestic violence and child abuse.

Of course, every charity gala needs its musical stars and this one was no exception. There was a set from Fitz & The Tantrums featuring their special blend of American Indie Pop and Neo Soul. Finally, Pitbull, closed out the night with a medley of his hits that got the crowd dancing their way out of their seats and eventually into the Manhattan night.

As they did, the chatter indicated that all at the Samsung Charity Gala had a great time. And most importantly, that the money raised would ensure better times ahead for those in need of help.