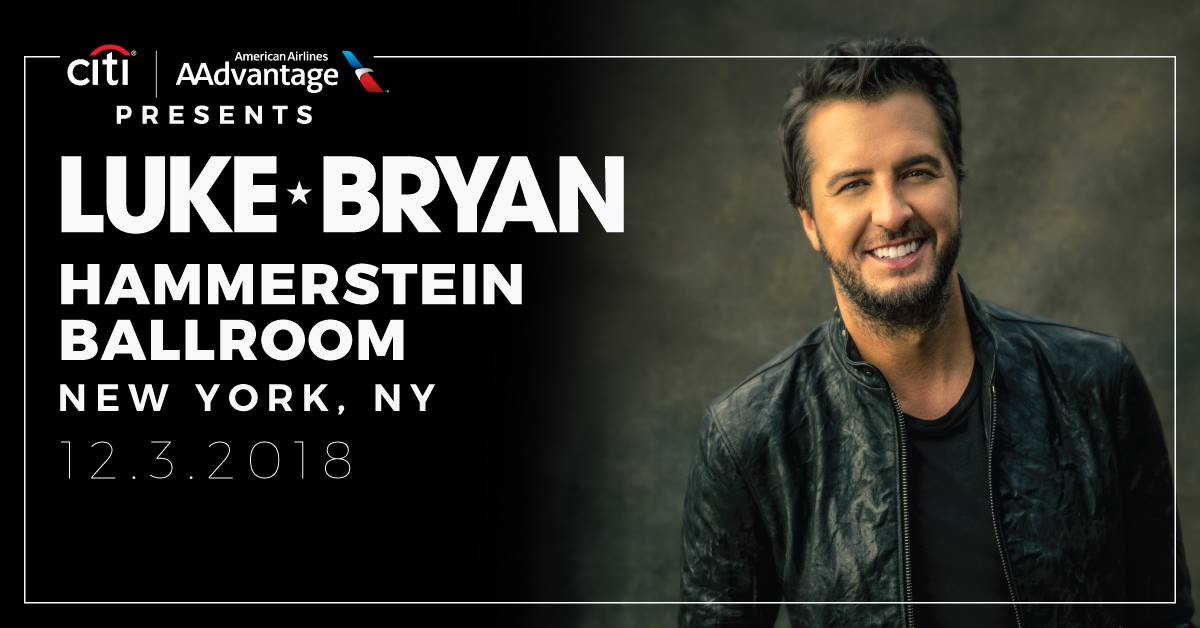 Since 1906, The Hammerstein Ballroom at Manhattan Center has been New York’s musical mecca. Name a star, and at one point or another, his or her name has been up in lights at this iconic venue.

The tradition continued with two recent performances that provided music fans with a wonderful contrast in style and genre. Let’s start with Luke Bryan, whose high baritone, rugged good looks and silky songwriting helped him win “Entertainer of the Year” honors from the Academy of Country Music Awards.

Taking the stage on December 3rd, Bryan, who is considered the father of “bro-country” opened his set for an exclusive audience of Citi/AAdvantage card members with “Country Girl (Shake It for Me)” and followed with hit singles including “Play It Again” and “What Makes You Country”, the title cut from his latest studio release.

Bryan weaved his wit and country charm throughout his sets, and by doing so easily disarmed any cynical New Yorkers who might be in attendance. Bryan continued to draw the audience closer with “Drink a Beer”, a somber and moving ballad that he wrote as a tribute to the untimely deaths of his brother and sister. To close the show, Bryan brought the crowd to its feet with “That’s My Kind of Night”.

Halestorm, with their hard rock and heavy metal roots, provided a stark contrast to Luke Bryan when they appeared at The Hammerstein Ballroom on their 2018 “Vicious” tour.

Featuring Lzzy (rock stars get to spell their names however they want to) Hale on vocals and her brother Arejay on the drums, this duo is dynamic is every sense of the word. How else can you play 250 or so tour dates a year?

When the four-member band took the stage, the crowd was already in a raucous mood from the pulsating opening act performance delivered by “In This Moment”. Keeping their foot on the musical accelerator, Halestorm opened with their raw and powerful hit single “Skulls” from their latest studio effort, “Vicious”. Wailing on her custom gold-black Gibson Explorer, Vale’s famous husky voice was in full throat as she commanded the attention of the amped-up crowd.

The entire set was a look back and forward with tracks from “Mz Hyde” and “Love Bites” to “Do Not Disturb” and, of course, “Vicious”. It also included Lzzy singing “The Silence”, accompanied by Joe Hottinger on acoustic guitar. A haunting and emotional love song, Vale shared her passion and pain with an enraptured sold-out house at The Hammerstein Ballroom.

From Luke Bryan to Halestorm, The Hammerstein Ballroom at Manhattan Center continues to attract the best musical talent in the world. And with more than 100 years of doing so, we don’t expect that to end anytime soon.